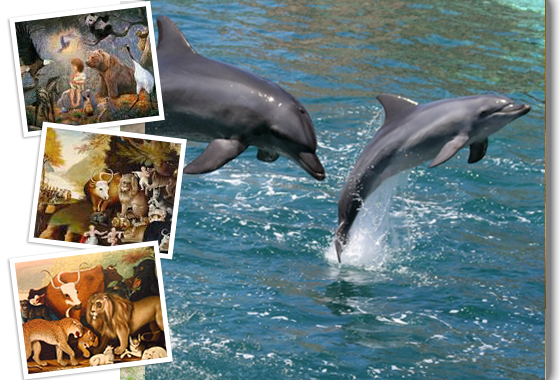 Autumn marks the start of the dolphin hunting season off the coast of Japan. Whalers, equipped with dragnets, harpoons and machetes, set out to sea in a “drive hunt” for dolphins. Once a pod is spotted, the hunters surround the dolphins with their boats and bang on metal poles that panic these acoustically sensitive animals. The hunters then force the disoriented dolphins toward shore where they are pinned against the coastline by nets. Once entrapped, they are kept at bay for inspection by agents of the marine mammal exhibition industry, which pays tens of thousands of dollars each for “show” dolphins.

Dolphins sold to marine parks are removed from their habitat and never again will they be free to swim and socialize with their pod. Instead, they are doomed to a life in captivity where they must perform tricks to survive. The trademark smile and the playful nature of dolphins, who are among the most intelligent animals on the planet, belies the predicament that they must endure in confinement.

The “surplus” dolphins (i.e., those not purchased by operators of dolphin exhibits) are not released back to the sea. Instead, they are slaughtered, for sale as food or fertilizer, by stabbing them with long knives, usually just behind the blowhole or across the throat, causing the animals to die from blood loss and hemorrhagic shock, or their spinal cord is severed. The maimed and dyeing dolphins thrash about and writhe as they try to escape, but there is no escape from the bloodbath.

The carnage off the coast of Japan had been a carefully guarded secret, until the Academy Award winning documentary The Cove exposed the horrifying truths behind the hunting of dolphins. The Japanese Times reports that the Japanese government allows about 19,000 dolphins to be killed each year. Yet, despite the magnitude of the killing and its gruesome nature, the International Whaling Commission has failed to take any action because, they say, dolphins are not included in its list of protected cetaceans.

Given inaction by the IWC, Congress should take measures to protect dolphins from being hunted. Congress has the power to regulate commerce with foreign nations and can ban the importation of products in order to effectuate policy objectives. The International Dolphin Conservation Program Act,  which bans the importation of certain products in connection with the use of purse seine tuna fishing nets to reduce the incidental killing of dolphins, is a prime example of Congress enacting trade measures to protect marine mammals.

It is imperative that Congress amend the Marine Mammal Protection Act  to prohibit the importation of dolphins, or dolphin products, taken as a result of hunting or any capture method that involves the killing of dolphins. The brunt of the economic impact of such legislation would be felt on the lucrative sale of “show” dolphins. A crucial side effect would be to marginalize the profitability of the dolphin slaughter business of the targeted fisheries.

With respect to the supply of dolphins for the exhibition industry, current sourcing methods can be replaced with a protocol whereby these magnificent creatures are obtained solely from certifiable rescue programs. Such a paradigm would serve the goal of affording sick and injured dolphins sanctuary, while not holding captive those capable of surviving at sea.

Hopefully, operators of dolphin ventures will see fit to reform their business models such that the beauty and grace of these remarkable beings can simply be observed in a serene environment compatible with their acoustical sensitivities. This new paradigm offers hope of making the dual stains on our legacy of dolphin captivity and dolphin slaughter a thing of the past.

Ira Fischer is an attorney-at-law in Delray Beach. He devotes his retirement to the cause of animal welfare through advocacy. Ira Fischer’s biography can be seen on his website www.irafischer.com.

Postscript to Protect Dolphins from Slaughter by Ira Fischer

Sea Shepherd Conservation Society  is also involved in protecting dolphins from slaughter. Sea Shepherd’s Cove Guardians  has volunteers standing watch on site at the Cove in Taiji, Japan. As anyone familiar with Sea Shepherd knows, their volunteers are courageous individuals, who risk their lives and liberty to defend the innocent victims of greed, and their presence on the seas is a force to be reckoned with.

That dolphin captivity is only briefly discussed in Protect Dolphins From Slaughter should not detract from the importance of the issue of marine mammal captivity and it is critical to raise public awareness of this important issue. According to the Humane Society of the United States: “When you see marine mammals in tanks or pools, consider what they have lost in order to entertain us … When captured from the wild, they are ripped violently and traumatically from their social units. The HSUS urges, ‘Don’t support this commercial cruelty. Refuse to swim with the dolphins or visit a marine mammal show.’”  Captive Marine Mammals  discusses what you can do to help free our kindred spirits of the sea from a life of confinement in a concrete tank.

The video, The Loneliest Whale in the World, narrated by Naomi Rose, Ph.D. (marine mammal scientist) discusses her visit to SeaWorld in Orlando, Florida to observe Tilikum – – the orca that has been in captivity for virtually his entire life and featured in the CNN documentary Blackfish.

The Loneliest Whale in the World